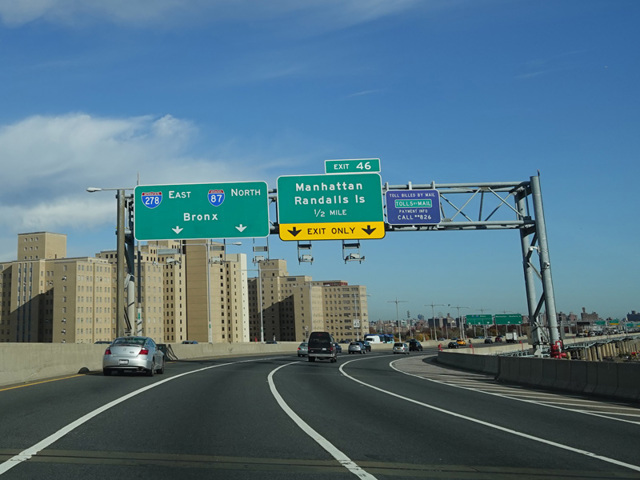 The New York section of I-278 begins at the Goethals Bridge at the New York-New Jersey state line. The first section is the Staten Island Expressway, which crosses Staten Island. At the end of the Staten Island Expressway, I-278 goes over the Verrazano Bridge to Brooklyn, where it becomes the Brooklyn-Queens Expressway. The section immediately after the bridge is also known as the Gowanus Expressway, but the signs all say "Brooklyn-Queens Expressway" so as not to confuse people. The expressway runs to the northeast along the water through Brooklyn. It passes the Battery Tunnel (I-478), the Brooklyn Bridge, the Manhattan Bridge, and the Williamsburg Bridge. It then goes over the Kosciuszko Bridge to Queens, where it has interchanges with the Long Island Expressway (I-495), Queens Boulevard (NY 25), and Northern Boulevard (NY 25A). It merges with the Grand Central Parkway and goes over the RFK Bridge, which was formerly known as the Triboro Bridge, to the Bronx, where it becomes the Bruckner Expressway. It ends at I-95 near the Whitestone Bridge (I-678) and the Throgs Neck Bridge (I-295).