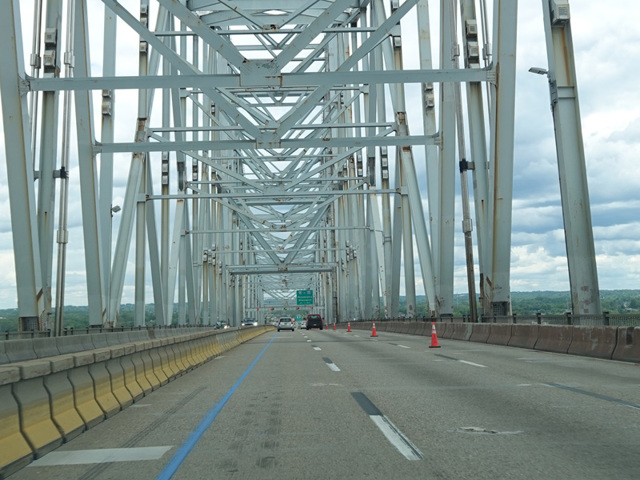 US 322 is a major east/west route extending from Cleveland, Ohio, to Atlantic City, New Jersey. It enters the state at the southern end of the Pymatuning Reservoir and runs east, gradually sloping to the south. It passes through State College, where it is multiplexed with I-99 for a short distance. It splits off as the Mount Nittany Expressway, which peters out after a couple of miles to become a surface road again. In Milroy, US 322 becomes an expressway again. In Lewistown, it is joined by US 22, and the two routes run multiplexed into Harrisburg, where they split at an interchange with I-81. US 322 follows I-81 and I-83 around Harrisburg and then splits off again, running east and southeast toward the suburbs of Philadelphia. In West Chester, there is a short expressway called the West Chester Bypass looping around the downtown area. US 322 is multiplexed with US 202 for part of the West Chester Bypass and then south along Wilmington Pike. In Concordville, US 322 splits off and follows Baltimore Pike (US 1) for about a mile to the east before splitting off onto Conchester Highway, which it follows until the Delaware Expressway (I-95) in Chester. It is multiplexed along the expressway for one exit and then splits off onto the Commodore Barry Bridge, which crosses the Delaware River to New Jersey.