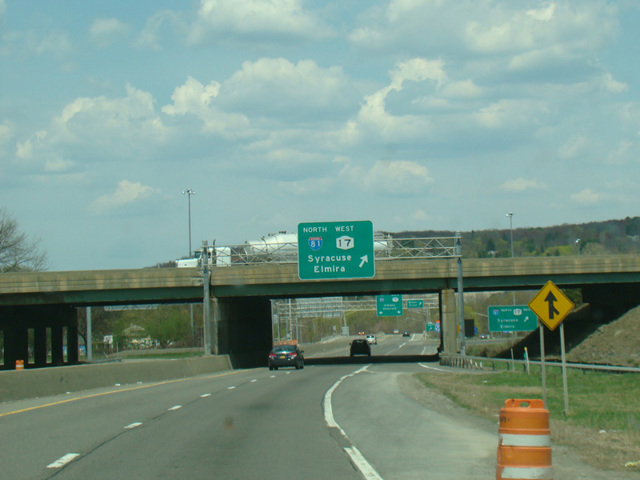 NY 7 is a diagonal route running through New York from Pennsylvania to Vermont. PA 29 turns into NY 7 at the state line. NY 7 runs parallel to I-81 and US 11 for its first few miles, gradually curving to the west until Binghamton, where it turns to the north again. After a short distance, it merges into the Brandywine Highway, a short expressway in Binghamton that is designated NY 363 south of the merge. There is an interchange with I-81/NY 17/Future I-86. Just north of it, NY 7 changes from being signed as a north/south route to being signed as an east/west route. The Brandywine Highway ends at exit 1 of I-88. NY 7 is multiplexed with I-88 to exit 4 and then is routed along the local streets parallel to it for its entire length.

Eventually, I-88 ends at exit 25A the New York Thruway (I-90). NY 7 continues, following Curry Road through Rotterdam to I-890. It is routed along I-890 for a couple of exits and then splits off to become a large divided highway called the Crosstown, which runs through Schenectady to Niskayuna, where it merges with Union Street to become Troy-Schenectady Road. In Latham, there is an interchange with the Northway (I-87). Troy-Schenectady Road becomes NY 2, while NY 7 turns north and is multiplexed with I-87 along the Northway. After one exit, it splits off to become a short expressway that extends east for a couple of miles before crossing the Hudson River on the Collar City Bridge to Troy. On the other side of the river, the expressway ends, and NY 7 follows Hoosick Street through Troy. It continues east to the Vermont border, where it becomes VT 9.