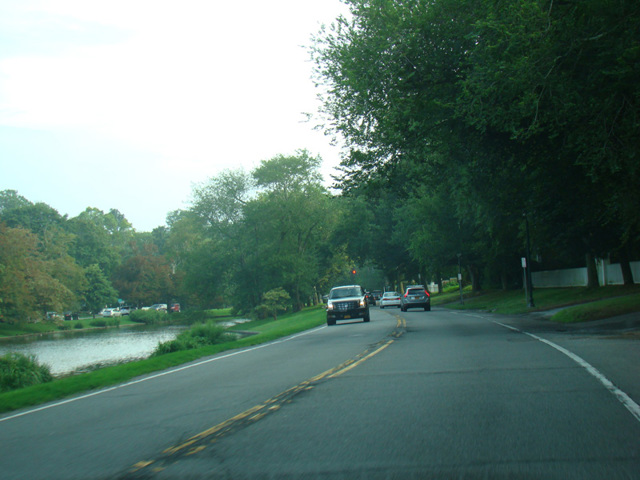 Just west of the Queens-Nassau county line, North Conduit Avenue and South Conduit Avenue leave the Belt Parkway and come together to form Sunrise Highway. Sunrise Highway is a large divided road with traffic lights. It runs along the south shore, parallel to Merrick Road, through all of Nassau and the western part of Suffolk. In West Babylon, Sunrise Highway becomes an expressway. Sunrise Highway the expressway runs along the south shore until the beginning of the South Fork. In Shinnecock Hills, Sunrise Highway ends and NY 27 is multiplexed with North Road (CR 39). NY 27 is multiplexed with North Road (CR 39) and Flying Point Road (CR 39A) through Southampton, until the end of CR 39A at Montauk Highway. Montauk Highway is a two-lane road with traffic lights. NY 27 is routed along Montauk Highway from CR 39A to Montauk Point, the easternmost point on Long Island. It ends at the Montauk Point Lighthouse. Over 120 miles long, NY 27 is the longest route on Long Island.