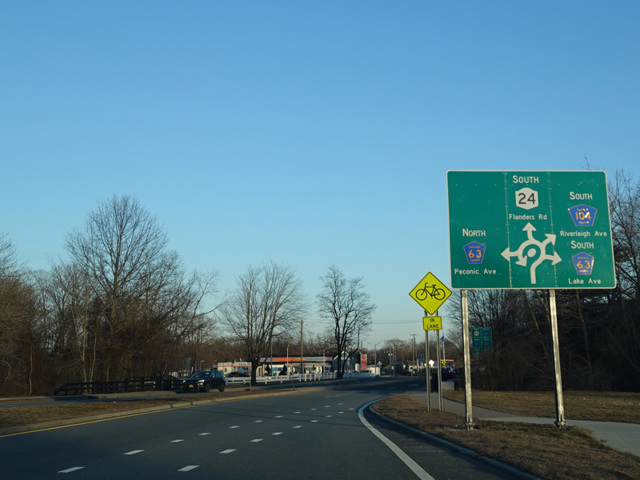 NY 24 begins at the Long Island Expressway (I-495) nears its eastern terminus. The first section is Nugent Drive, a four-lane divided highway running east to the south of the Peconic River. It is maintained by the county and is also designated CR 94. Continuing to the east, Nugent Drive changes names to become Center Drive. At the end of Center Drive, there is a major traffic circle. CR 94 ends at this point. NY 24 becomes a two-lane undivided road and curves to the southeast. It is known as Flanders Road and then changes names to become Riverhead-Hampton Bays Road. Near the southern terminus in Hampton Bays, it widens to four lanes again. There is a cloverleaf interchange with Sunrise Highway (NY 27). Immediately thereafter, NY 24 ends at Montauk Highway (CR 80).

There is another route further west that is also designated NY 24, following Hempstead Turnpike and extending from Hillside Avenue (NY 25) in Queens to Broad Hollow Road (NY 110) in Farmingdale. The two routes used to connect before World War II, with NY 24 extending through Suffolk County from the current eastern terminus of the western section to the traffic circle on the eastern section. CR 94 had not yet been built at the time. NY 24 followed roads such as Long Island Avenue, Pine Aire Drive, Suffolk Avenue (CR 100), Johnson Avenue, and Union Avenue, which are now no longer part of the state route system. The original, contiguous NY 24 was an east/west route. Presently, the western section is an east/west route while the eastern section is a north/south route.