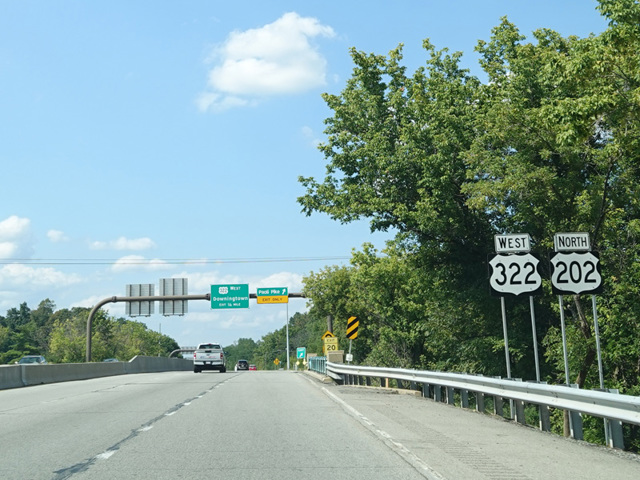 US 202 extends from Wilmington, Delaware, to Bangor, Maine. It primarily passes through rural areas, avoiding major cities such as New York, Hartford, and Boston. In Pennsylvania, it is marked as a north/south route, although it is considered an east/west route in other states such as New York. It enters Pennsylvania from Delaware a few miles north of Wilmington. The first section is a four-lane divided highway with traffic lights called Wilmington-West Chester Pike and then Wilmington Pike. In West Chester, US 202 becomes an expressway called the West Chester Pike, running north and then east to King of Prussia. There, the West Chester Bypass ends and US 202 returns to being a four-lane divided highway with traffic lights, now known as DeKalb Pike. In Bridgeport, US 202 turns off onto DeKalb Street, a two-lane undivided road. It continues northeast as a two- to four-lane surface road, with some sections divided and other undivided, to New Hope, where it crosses the Delaware River to New Jersey. Along the way, there is a very short section in Doylestown where it becomes an expressway again.