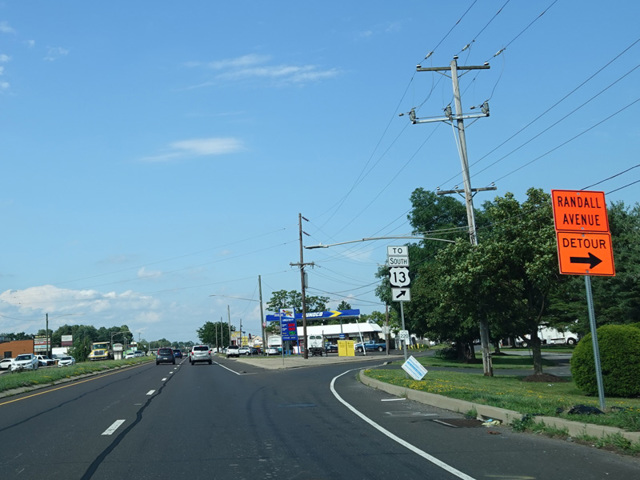 US 13 is a north/south route extending from Eastover, NC, to Morrisville, PA. It enters Pennsylvania from Delaware just south of Chester. It runs northeast, near the Delaware River, through Chester before curving inland toward Philadelphia. It enters Philadelphia via Baltimore Pike, which ends at South 38th Street. US 13 follows South 38th Street and North 38th Street before turning east onto Powelton Avenue for a few blocks. US 13 is then routed along a pair of parallel one-way streets. Northbound traffic follows North 33rd Street and Mantua Avenue, while southbound traffic follows North 34th Street. After a few blocks, the two directions come together to form a two-way North 34th Street, which ends at West Girard Avenue.

US 13 follows West Girard Avenue across the Schuylkill River. On the other side, North 33rd Street begins again, and turns north onto it. After about a mile, it splits off onto Ridge Avenue and then turns northeast onto West Hunting Park Avenue. After another couple of miles, West Hunting Park Avenue merges with the Roosevelt Expressway (US 1) to become Roosevelt Boulevard, a large divided boulevard with service roads. US 1 and US 13 are multiplexed along Roosevelt Boulevard for a few miles, and then US 13 splits off onto another pair of parallel one-way streets, Robbins Street and Levick Street, which it follows for about a quarter of a mile to Frankford Avenue. Heading out of Philadelphia, Frankford Avenue become Bristol Pike. US 13 follows Bristol Pike for most of the remainder of its length. For its northernmost couple of miles, US 13 becomes an expressway before ending at US 1.