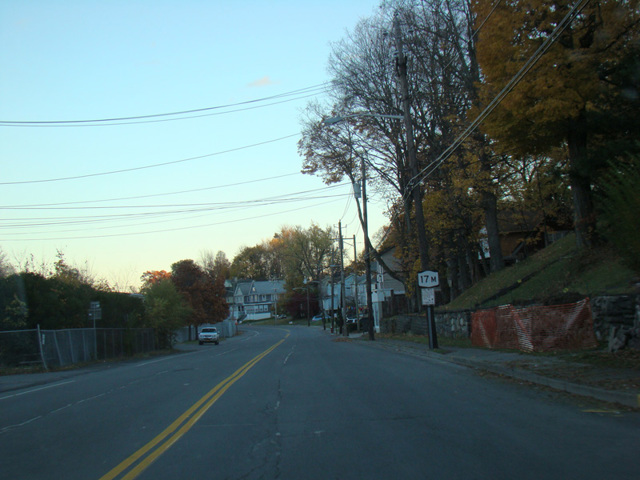 NY 17M is an east/west route that follows the Quickway (NY 17/Future I-86) through Orange County. While the Quickway is an expressway, NY 17M follows local roads. It begins at Bloomingburg Road (CR 76) in Wallkill. The western terminus was originally an interchange with the Quickway, exit 118A, but this interchange has been removed and CR 76 simply turns into NY 17M where it used to be. NY 17M runs south into Middletown, where it is known as North Street. After about a mile, NY 17M is multiplexed with NY 211 along Wickham Avenue and West Main Street. It then splits off to the southeast along Monhagen Avenue, which becomes Fulton Street after a few blocks. Fulton Street ends at Academy Avenue. NY 17M turns southwest onto Academy Avenue and then south onto Dolson Avenue.

Just past the city line, NY 17M intersects US 6, and the two routes are multiplexed. There is then an interchange with I-84. NY 17M and US 6 run together through New Hampton to Goshen, where they merge with the Quickway. After a couple of exits, NY 17M splits off again. It runs along the Quickway through Goshen, Chester, and Monroe to Harriman, where it ends at Averell Avenue (NY 17).