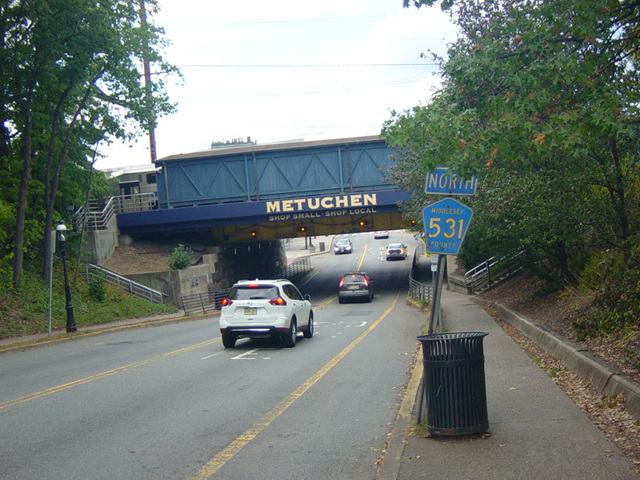 CR 531 is a north/south route from Edison to Long Hill. It begins at Woodbridge Avenue (CR 514) and runs north through Metuchen. The first section is known as Main Street. At the end of Main Street, CR 531 turns west onto Plainfield Avenue and follows it for a few blocks to where it ends at Central Avenue (Middlesex CR 669) and Plainfield Road. CR 531 turns north onto Plainfield Road for a little over half a mile and then west onto Park Avenue, which turns to the north after about half a mile. Park Avenue runs north to Watchung, where it ends at a traffic circle at Mountain Boulevard (CR 527) and Valley Road (CR 527). North of the circle, CR 531 is known as Hillcrest Road. It runs north to a small bridge over the Passaic River, where it changes names to become Mountain Avenue. A short distance north of the river, CR 531 ends at Valley Road (CR 512). Mountain Avenue continues north as Morris CR 638.