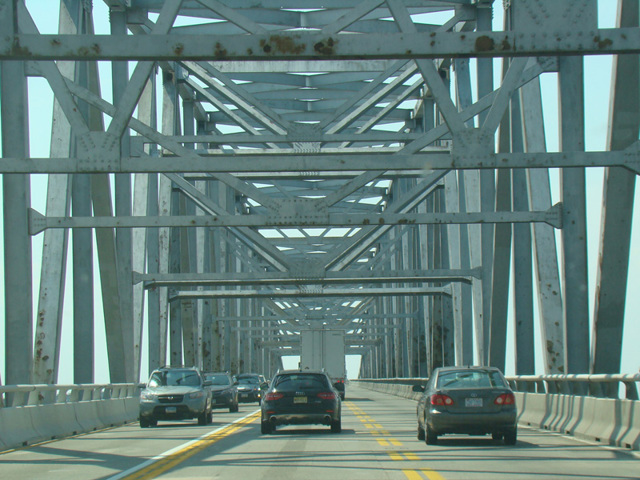 US 50 is a major east/west route crossing the country from West Sacramento, California, to Ocean City, Maryland. It enters Maryland from the District of Columbia and immediately becomes an expressway called the John Hanson Highway that runs east to Chesapeake Bay. The section of the John Hanson Highway between the Capital Beltway (I-95/I-495) and MD 70 is also designated as I-595, but this designation is unsigned. US 50 crosses the Bay Bridge, a long bridge over Chesapeake Bay, to the Eastern Shore of Maryland. There, the expressway ends and US 50 becomes a four-lane divided road with traffic lights and at-grade intersections called Ocean Gateway. It curves to the south and then to the east, going around Delaware to remain in Maryland. In the vicinity of Salisbury, US 50 becomes a semicircular expressway around the town called the Salisbury Bypass. US 13 multiplexes with US 50 after about a mile. After another mile, US 50 splits off to continue east as Ocean Gateway, while the Salisbury Bypass continues south as US 13. Ocean Gateway continues east to Ocean City, where it ends at Baltimore Avenue (MD 378) and North Division Street (MD 290) in Ocean City.