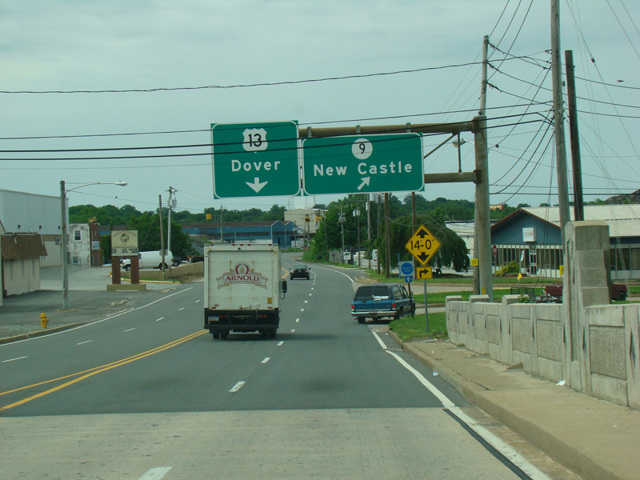 US 13 is a north/south route extending from Eastover, NC, to Morrisville, PA. The section in Delaware runs the length of the state from the southern border with Maryland to Wilmington and then north toward Philadelphia. For much of its length, US 13 is a four-lane divided road. It is known as Sussex Highway in Sussex County. In Kent County, it becomes known as South Dupont Highway and North Dupont Highway. In the vicinity of Smyrna, it is called South Dupont Boulevard and North Dupont Boulevard. North of Smyrna, it is known as Dupont Parkway.

North of the Chesapeake and Delaware Canal, US 13 turns west to multiplex with DE 72 along Wrangle Hill Road for one block and then multiplexes with the DE 1 expressway. After one exit, it splits off and it known as Dupont Parkway once again. There are interchanges with I-295 and I-495, and then Dupont Parkway ends, narrowing down to become a two-lane undivided road called South Heald Street. US 13 follows South Heald Street and Fourth Street into Wilmington, where it is routed along a pair of parallel one-way streets, Church Street and Spruce Street. They come together after a few blocks to become Governor Printz Boulevard, which runs right next to I-495 before eventually curving away from the highway to end at Philadelphia Pike. US 13 turns north onto Philadelphia Pike and follows it north to Pennsylvania.