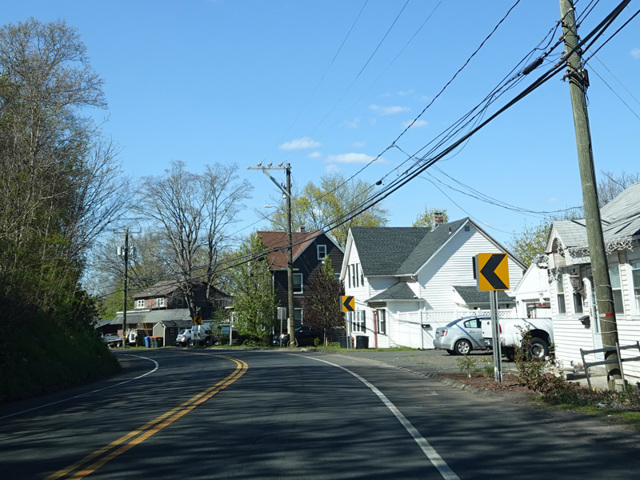 CT 71 is a north/south route extending from Wallingford to West Hartford. It begins at the northern terminus of CT 150, where US 5 takes over South Broad Street as North Colony Road ends. It is wrong-way multiplexed with CT 150 along South Broad Street for a short distance and then turns north onto Old Colony Road. In Meriden, Old Colony Road becomes Cook Avenue, which ends at West Main Street, CT 71 turns west onto West Main Street for a few blocks and then north onto Chamberlain Highway.

There is an interchange with I-691, and then Chamberlain Highway runs north to Berlin. There, CT 71 turns onto High Road, while Chamberlain Highway continues north as CT 71A. After a few blocks, High Road splits off to become a local street, while CT 71 continues as Percival Avenue, which ends after about a mile at Main Street. CT 71 turns east onto Main Street and then north onto New Britain Road. There is an interchange with the CT 9 expressway.

Just north of the interchange, New Britain Road enters New Britain and becomes South Main Street. It changes names to become Franklin Square for two blocks as it passes next to Franklin Square Park. After that, it is known as Elm Street. There is an interchange with the CT 72 expressway. On the other side, it becomes Martin Luther King Drive and then Stanley Street. After a couple of miles, Stanley Street splits off to become a local street, and CT 72 is known as Hartford Road.

There is another interchange with the CT 9 expressway, and then Hartford Road becomes South East Road. It runs north until just south of the Yankee Expressway (I-84/US 6). There, it curves to the east to become New Britain Avenue, which runs parallel to the expressway for a short distance. Then, CT 71 ends at South Main Street (CT 173). At this intersection, CT 173 turns onto New Britain Avenue, which the section of South Main Street to the south is a local street.